Welcome to the week of the science themed newsletter,

The Middle school has had some amazing guest speakers and field trips on energy, watersheds, and estuaries recently. Last Thursday we had Dr. Veronica Berounsky, marine research scientist and researcher for the Narrow River Preservation Association, take us on a tour of the Narrow River watershed. On the tour we learned some incredible things. For example, did you know that one third of the freshwater in the Narrow River comes from Gilbert Stewart’s home? We also found it interesting that the upper and lower ponds of the watershed are over sixty feet deep. Also, in the first two ponds there are organisms that live deep in the water with no dissolved oxygen and instead in a sulfur-based environment with no oxygen or sunlight. We also learned about salinity levels. For example the salinity in the ocean is 32 parts per a thousand or ppt and freshwater is 0 ppt. Because of this data, the results of our testing had evidence to back up the claimed salinity level. Finally, we learned about the history of the Narrow River watershed. The class was told about how the glaciers made the landscape of the watershed. 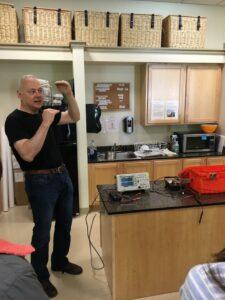 On Tuesday the Middle School went to the Rhode Island Nuclear Science Center. While there, we learned about nuclear energy and nuclear reactors. We learned about how scientists control the amount of energy they make in a nuclear reactor and how they can shut it down in less than a second by dropping boron into it to stop the fission process. Fission is how energy is extracted from uranium atoms. Fission is achieved by bombarding a uranium atom with neutrons and splitting it apart. This releases energy and starts a chain reaction causing this process to continue. Boron sticks are used to absorb neutrons, so when boron is put in the reactor it stops or slows the process. After we learned about these processes, we were able to see the nuclear reactor. Because the reactor admits a dangerous amount of radiation, shielding is a vital part of the reactors

design. The reactor is surrounded by concrete and lead walls and is under 25 feet of water. When a reactor is under water it is in a medium and then cherenkov radiation is can be created. It is created when an electron is thrown faster than light speed in a medium. This creates a really beautiful blue glow coming from the submerged reactor. Over all the trip to the RINSC was incredible and one of the best field trips a class could go on. The middle school was not permitted to take any photos inside the building or of the reactor but this is a picture of what the Cherenkov radiation looks like.

The Importance of Outdoor Play for Toddlers

The Path of Primary